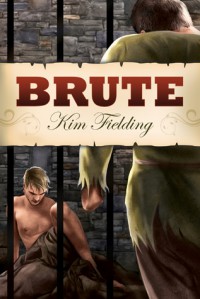 I read a Cracked article recently about how, as you grow older, it becomes harder to enjoy certain things in movies.  Instead of enjoying the car chase you feel feel bad for the people being plowed down. Instead of admiring the loner who picks up and leaves, you think he's a dick for abandoning his family.  That sort of thing.

I don't know that it is really age related, because I have always had a soft spot for the bystanders and side characters in stories.  And that is why I had a hard time enjoying this book.  Brute's world is horrible, not just for him but for everyone who suffers any sort of misfortune or disability.

When the story starts, we learn how abused and mistreated Brute has been.  He is big and ugly, and his parents were despised by the locals, so he is picked on, abused, cheated by his employer and miserable in every way.  His town is an awful place, and it is a relief when he leaves.  But then he gets to the big city and you realize that it isn't the town that is awful - it is the whole society.  People starve and freeze to death.  A guy who has lost both hands is left to sit in the street and beg.  There is apparently no hint of any sort of safety net, and no one has any problem with this.  At one point, Brute tries to get someone in charge to help him find a beggar who is about to freeze to death, and the guy in charge refuses and points out that people would be pissed if they were asked to help beggars.

It's a good story, it's well written, and I liked the two main characters.  But I am just too soft hearted for this sort of story.