The Druid Stone by Heidi Belleau 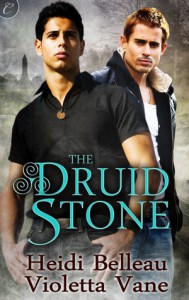 I listened to the audiobook. Good reader, though Sean's American accent was a bit odd.

What I liked: Sean. At first he seemed too pathetic and helpless, but he really came into his own. He never gave up or backed down for long. He talked back to every all-powerful sadistic being he ran into. He jumped in to save himself and others whenever there was an opening. He was determined to the right thing. He knew they had to

try to save Michael from his grisly death in the past even though it rightly scared the sh*t out of him. He knew he needed to go back to the U.S. and get off his prescription meds and get his life in order even though it was hard and lonely.

Aoibheann. I liked her in every incarnation, and each one made sense in terms of her development and situation at the time. She was brave, loyal, and smart. It was a pleasure to see her in action.

Parts of the story. It was really gripping and suspenseful. The sidhe were thoroughly scary, as were the Vikings. I was especially impressed with the watery escape from Sreng. How terrifying to force themselves to go down into the water when it felt like certain drowning.

What I didn't like as much: Cormac. He was a racist a**hole when Sean first met him. He was choked with guilt and angst for nearly the whole story. He didn't seem to have much on the ball for someone who was supposed to be an expert. On the other hand, he was fearless, and he came through for Sean in the end in a very satisfying way that showed character development.

Other parts of the story. It got a bit repetitious - could have gotten by with one or even two fewer trips into the mounds. The family scenes went on too long for what they added to the story. It was way more grisly than necessary in my view. And what the story did to Michael was just too cruel for me.

Not only does he have to suffer centuries of torture, he loses his magic when Sreng dies and ends up so injured and PTSD he can't even work.

Overall: good, exciting story with a satisfying ending. I will listen to it again.