A Token of Time by Ethan Day 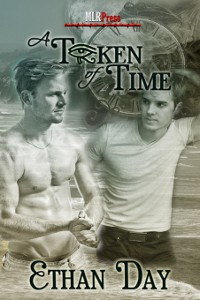 Note: this review contains some unhidden spoilers. They are relatively minor and common tropes in the time travel genre, so I left them. I did hide the more major spoilers.

The beginning wasn't promising. Piles of angst: evil violent family, dead boyfriend (and it is kind of Zachary's fault), Zachary in a downward spiral of angst, depression, and lack of personal hygiene. I felt like I was reading Amy Lane or Harper Fox there for a bit. But then it cheered up and I started to have a much better time. Zachary holds a necklace and uses his psychic abilities to see something that astonishes him and changes everything.

The trip back in time was really lovely, with a soft golden glow that felt entirely appropriate to the old Hollywood setting. Marc was maybe too perfect, and the antagonist too evil, but it fit nicely with the glamour, the parties, the intrigue, and Zachary's "amnesia." The suspense over when

the necklace would break and send Zachary back to the present

kept me on edge. The things Zachary changed in the past made sense, and I was anxious to see how the present would look because of those changes. Zachary had some (entirely appropriate) misgivings about falling in love so soon after his long-term boyfriend Nick died, and he has a dawning realization that his former relationship was not entirely a good one (Nick was a bit controlling and jealous, and Zachary was tied to him by dependency and fear more than by choice and strong feelings). The use of Zachary's abilities was interesting and made sense (though I thought Jonathon's abilities were kind of vague and underutilized). This section of the book was by far my favorite, and the reason for the four star rating.

Back in the present, Zachary (in spite of his sorrow) feels stronger and less victim-y and ready to take on the task of

stripping his evil sister of her powers

. I liked seeing Marc's friends in their new circumstances, and everyone's happiness when

Marc appeared from the past

was fun to watch. But the rest of this section was a little thrown together for me. It isn't explained why

Marc could come forward in time at all.

It makes sense that it took six years to figure out, but there is no explanation of what was accomplished during that time or why it worked. The necklace suddenly had powers that came out of nowhere (it was manufactured in the plot device factory I guess), and the final confrontation was quick and not very meaningful. It wasn't a bad ending - it just didn't live up to the section of the story that occurred in the past.

The epilogue was a mistake I think. Yeah, we needed to know that the Big Bad got his, but it wasn't a good way to end the book - icky and violent. I would rather have been shown that the HEA was real (instead of just being told that Zachary "had a feeling" it would all work out).