Outcast Mine by Jamie Craig 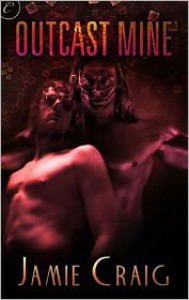 I liked the chemistry between the main characters, and I always like a good alien lover, and Jasik was very appealing indeed. There is a scene with licking which was way hotter than I would ever have thought it would be. Warning though - Jasak's species is a bit, well, vampire like - if you have a blood squick, give this one a miss.

The first three quarters of the story were really excellent. The prison environment was vivid and the peril felt scary and real. The last quarter though - it wasn't bad, exactly, better than most in the genre, but it didn't live up to the first three quarters. Everything was coming to a head, the various factions and conspiracies were gelling, and time was running short, and then stuff just kind of resolved. The two main characters kind of blundered around and had things happen to them instead of being clever and making things happen.