The Magpie Lord by K.J. Charles 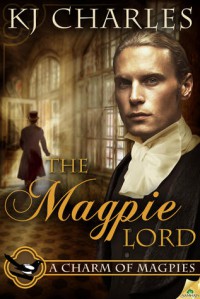 I enjoyed this one a lot.  I put off reading it, even though I was pretty sure I'd like it, because it is sort of a historical.  Plainly I need to rethink my bad attitude about historicals, at least when they are paranormal as well, because I am really liking the Whybourne and Griffin series too.

The banter between Crane and Stephen (and between Crane and Merrick also) was good, and I liked the characters.  Stephen was beginning to annoy me with his shortness and his weakness and his general loser vibe, but then: the fluencing!  That reminded me (and Crane) that if Stephen wants to, he has plenty of power to counteract all Crane's money and looks and tallness.

The story was also good, but it did feel like the first in a series.  Introducing the characters and the world and the system of magic took time and energy from the plot, which felt a bit rushed.  I expect that the next book will be better for that reason.  I sometimes feel that authors should write the first book in the series with all of the world building - and then not publish it. Start with the second book which only includes quick clues and reminders of all of that. But I have read way worse examples of that than The Magpie Lord, which was actually pretty graceful with its world building.

I am looking forward to the next one.