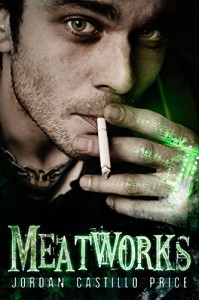 Warning for some spoilers below.  This isn't really a plot driven book, but I do mention some details from near the end of the book.

I am not surprised that this one didn't end up quite working for me, but I am a bit surprised by the reason.  I was warned that Desmond is a very hard character to like (especially at the beginning), and that the romance is on the weak side. But by the end, both the characters and the romance pretty much did work for me.  What left a sour taste in my mouth and will probably keep me from reading this one again is the crapsack world and the fact that characters I grew to like still have to live there.

At the beginning, Desmond really is everything I was warned about.  He has had something awful happen to him, but he is so determined to make the worst of it at every turn that it is frustrating.  He didn't sound like much of a winner even before his accident, and now he refuses to learn to use his prosthetic hand and resists every effort of the social services system to help him.  They have to threaten to cut off his disability payments just to get him to show up for a support group meeting, and he is an ass to everyone there.  Up until about the 50% mark, it is nearly all self destructive and unpleasant behavior. If I hadn't Kindle borrowed this book (and thus been forced to finish it within two weeks) I might have gotten bogged down and given up, at least for a while.

Right about 50%, Desmond starts to get a clue.  He finds a reason to learn to use his hand, tries to become a better boyfriend to Corey and friend to his ex, Jim, and faces up to some really horrific memories.  I can deal with a lot of depression and self-destructive behavior, and even whining, if the character has a good reason for being the way he is and he is trying and getting better.  I adore Vic from the Psycop series, for example.

There were moments in this part of the book that were great - I am thinking about the Sea Monkeys bits and when Corey keeps handing Desmond the bolt cutters, to Desmond's bewilderment. And when Desmond visits the scene of his accident and realizes how badly he was betrayed by his longterm "friends". And Desmond fixing his refrigerator.

But this part of the book was weighing down on me for another reason - the world they all had to live in.  The city was pretty damned depressing in its rustbelt squalor, but what was worse was the people, and particularly everyone involved with social services.  At first I was annoyed with Desmond (and Corey for that matter) for their resistance to what seemed like very reasonable requirements - attending support groups, seeing a psychiatrist, learning job skills.  But every single person and experience was worse than useless.  Every professional (and volunteer) was incompetent and usually spiteful as well. The job sites were actively dangerous.  I realized that both Desmond and Corey were depressed, and had been since before their respective injuries, but to the extent they came out of it, it wasn't because of anyone or anything around them, but in spite of those things.

I actually found the romance to be fairly satisfying.  I like their chemistry and the way they seem to challenge each other and wake each other up.  I just wish they weren't stuck in grimdark city.